Ravey Rave (by Chelsea)
Auntie Rae (by Levi, Alice)
Ms. B (by Tess)

Raven Lydia Baxter (formerly: Carter) is a fictional and precognitive teenager from the Disney Channel sitcom, That's So Raven, as well as on the new spin-off series, Raven's Home. Often referred to as "Rae", she has a sassy attitude, and she's clumsy. She has friends and a loving family, and she attended Bayside High School. Raven Baxter is extremely allergic to mushrooms. She cleans when she's nervous, and her favorite drink is orange juice. According to Chelsea, her favorite gemstone is diamond, her favorite vegetable is corn, and her favorite animal is stuffed. Raven is well known for her fashion sense and style. She loves fashion so much that she even designs her clothes and wants to become a fashion designer like her idol, Donna Cabonna, whom she worked for as an intern.

Later, Raven goes to visit her father and brother, Cory at their new job at the White House in Washington, D.C. Her father is surprised by her unexpected visit to the White House and exclaims, "You didn't get kicked out of design school because they don't give out refunds!", thereby revealing she attended design school after graduating from high school.

Even later on, she and Devon marry and have two twins - something which gave Devon a heart attack - and then divorced; Chelsea moves in with Raven as the pair are both divorced and needed to for tax purposes.

Raven is of African-American descent. Her eyes are brown and her hair color is usually jet black, although she experimented with it and turned her hair light brown for a year.

A trademark thing about Raven is that she thinks of herself as a master of disguise, which fits in with her trouble-making antics and passion for becoming a fashion designer. What prompts her to dress up in a disguise is usually her psychic visions and dressing up in a disguise is just one part of her plan to either make her vision happen or prevent it from happening.

Raven is clairvoyant and frequently has "visions", which allow her to see into the future and see what may happen next. However, most visions are vague, and she is unable to "see" everything that might happen shortly. This causes her to wonder what her visions mean, in which case her attempts to change these upcoming events end up either making it happen or making it worse, depending on what the situation is.

More images of Raven Baxter can be found at her Gallery

Raven has a vision 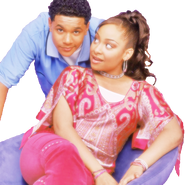